“The revolution in electric vehicles set to upturn industries from energy to infrastructure is also creating winners and losers within the world’s biggest metals markets. 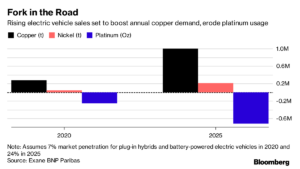 While some of the largest diversified miners like Glencore Plc argue fossil fuels such as coal and oil still play a crucial role supplying energy needs, they’ll also benefit the most from a move to electric cars, requiring more cobalt, lithium, copper, aluminum and nickel.

The outlook for greener transportation got a boost this year as the U.K. joined France and Norway in saying it would ban fossil-fuel car sales in coming decades.”