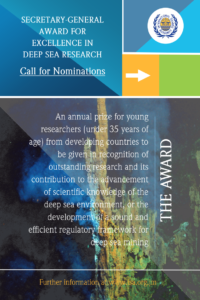 The International Seabed Authority is mandated to promote and encourage the conduct of marine scientific research in the Area and to coordinate and disseminate the results of such research. In line with this, the Secretary-General’s Award for Excellence in Deep-Sea Research is intended to recognize and encourage the achievements of young researchers from developing countries who have made outstanding contributions to the advancement of scientific knowledge of the deepsea environment or to the development of environmentally sustainable regulatory frameworks.

All nominations should be emailed to sgaward@isa.org.jm (link sends e-mail) by the 15 April 2018 deadline.

The Terms of Reference for the Award and the process for nomination and selection are as follows:

The Secretary-General’s Award is intended to recognize individual accomplishment. However, there may be cases where the research has been undertaken by a team, consisting predominantly of eligible candidates. In such case, a team nomination may be submitted.

Nominations and applications must be supported by two sponsors.and should be received no later than April 15, 2018.

Nominations should consist of the following documents:

A five-member Advisory Committee is a voluntary committee, appointed by the Secretary-General, with responsibility for the evaluation of nominations and are recognized for their expertise in the field of deep-sea science (natural and/or applied); social sciences and humanities with experience in the law of the sea; international law; or management of marine resources.

Members of the Committee are:

An award will be presented to the successful applicant.  The name of the winner will be announced at the annual session of the Assembly of the International Seabed Authority.

A Glance at the Mining Code