Since August 2012, Paul Lynch has led the Cook Islands’ Seabed Minerals Authority, which oversees development of the islands’ national seabed mineral resource. A lawyer with over 25 years of wide and varied legal experience in the private sector, Commissioner Lynch is shaping deep sea mining as an industry, both in the Cook Islands and on the international stage. 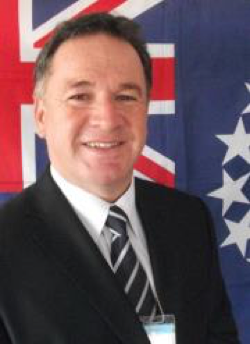 As one of his responsibilities, Commissioner Lynch represents the Cook Islands at the International Seabed Authority (ISA). Using his experience with his nation’s own landmark seabed mining legislation, he hopes to help the ISA shape an effective and responsible international Mining Code.  In addition to significant seabed resources at home, the Cook Islands also holds an ISA contract through 2031 for the exploration of polymetallic nodules in the Clarion Clipperton Zone (CCZ), a strong indication that this Pacific Island State is shaping up to be a major actor in seabed minerals development at the international level.

DSM Observer spoke with Commissioner Lynch this month to get his views on the future of deep sea mining.

My main role is to lead the Cook Islands Seabed Minerals Authority (SBMA) as we implement the Seabed Minerals Act of 2009, the world’s first, dedicated seabed minerals related national legislation. That Act has been continuously reviewed and amended to ensure it contains best practices in this emerging sector. From 2013, when the SBMA came into effect, we have been setting up our Regulatory Framework (laws and rules) to ensure that any future seabed minerals activity that may take place under our jurisdiction does so according to best practices and information, and complies with our laws and international and regional treaties and agreements. We have been capacity building Cook Islanders in this new sector, generating interest in our large and valuable manganese nodule resource and making new beneficial connections with people and entities in the deep sea minerals industry and related sectors.

From your perspective, what does the future of deep seabed mining look like? What are the opportunities?  The challenges?

For the Cook Islands, as with many stakeholders in this new sector, we see the technical and environmental issues as the most challenging to be addressed and overcome. As a developing nation, these issues- like global minerals prices – are largely not within our control. So for now, we are taking the necessary, steady steps that we can to progress our new DSM (deep sea minerals) sector, as it could be a valuable new way to diversify our economy and generate new national revenue from our own resources.

The waters of the Cook Islands are estimated to hold some 15-20 per cent of the world’s presently known resource of cobalt. What does that mean for the Cook Islands, and how is the country approaching developing this resource in light of environmental protection?

Our nodules have a high cobalt content, which will be increasingly valuable as global demand strengthens for this metal. We have developed a regime of controls on seabed minerals activity, which includes community input and strong environmental safeguards. Like other jurisdictions, in the Cook Islands no DSM permit can be obtained unless an environment permitting process has been satisfied. And like the international standard applied by the ISA, we will adopt monitoring and compliance standards as a fundamental condition of any proposed DSM activity.

The Cook Islands has also just passed the 2017 Marae Moana Act, being a national marine managed ocean space over our whole EEZ (almost 2 million km2), based on conservation and zoned areas of resource utilisation, founded on a holistic, “whole of ocean” and precautionary approach.

An agreement was recently reached between the Cook Islands government and a United States-based company, Ocean Minerals LLC (OML) for prospecting and exploration of polymetallic nodules in your EEZ. What type of benefits does this bring to the Cook Islands?

The Cook Islands wants to partner with the right entities to ensure that if DSM takes place, then it is conducted on best practices and offers a fair return for all parties. Training of Cook Islanders is essential and will be a part of all activities by OML. This has already started with a young Cook Islands Marine geologist taking part in the Resource Assessment recently undertaken by OML.

It is expected that in the future, our partner in our ISA block, held by CIIC, being GSR/G-TEC of Belgium, will with CIIC, also take an interest in the resources in our EEZ. This entity has already started involving Cook Islanders in the DSM work in the ISA Area.

How long have you been representing the Cook Islands within the ISA? What has changed with the organization and the momentum towards initiating deep seabed mining in the Area since you arrived?

The Cook Islands has re-taken its seat at the ISA since 2013, with the prompting and assistance of SPC (now the Pacific Community). This allows us to engage and network with the international community on this important topic. We can also ensure that we adopt the appropriate international standards on DSM in our EEZ as required by the UN Convention on Law of the Sea (UNCLOS) which we are a member nation of. In recent years at the ISA, there has been a noted upsurge in interest in the actual prospect of harvesting seabed minerals in the near future. But there remain many obstacles to overcome, if the required consensus can be achieved at the ISA between member nations.

What can the development of seabed mining within Cook Islands jurisdiction and the process to launch the industry in the Area learn from each other? Do you find that you bring lessons home from the ISA that can be applied at the national level, or does your domestic experience better inform your approach at the ISA?

Yes, there are cross-over lessons to be learnt from and shared in the ISA and domestic situations. For example, our people actually live on islands in the Pacific Ocean where DSM could take place. So while we do want to develop national revenue from our own ocean resources, the need for high environmental safeguards is of paramount concern. So accordingly, we would want the ISA to adopt appropriate and effective safeguards before any proposed DSM extraction phase could begin.

The Cook Islands intends to learn from and help guide the international progress of DSM based on good management and best practices.

What do the Cook Islands envision for a completed The Mining Code? What are your goals and what would the best possible policy outcome look like from a Cook Islands perspective?

The Mining Code needs to be clear and workable for all stakeholders. If it is too weak then the ocean could suffer. If it is too draconian then industry will not fund any development in DSM extraction. So progress would need all stakeholders to collaborate to consider each other’s needs, while keeping at the forefront, avoiding and mitigating the potential environmental costs to the ocean of such activities.

Since 2014, the Cook Islands has its own Seabed Minerals Policy which balances economic needs with environmental concerns, and with our sustainable development goals (MDGs. NSDP).

Are there specific needs for the development and implementation of the Mining Code that the Cook Islands has as a Small Island Developing State that may differ from other types of state actors?

Again, our people actually live on islands in the Pacific Ocean where DSM could take place so we need to see real, effective consideration and treatment of all relevant issues, related to DSM development.  As a developing nation, we have resource constraints. We continue to have serious education, training and capacity building needs in this new, frontier sector, for which we need on-going assistance.

What’s your biggest challenge on the job? What would you most like to achieve for the Cook Islands?

The biggest challenge was setting up our national Regulatory Framework from 2013-15. But that has now been achieved. So we move onto how best to implement and attract investment interest to take part in the licensing system that we have, starting with Exploration over the next 3-5 years. As at this date, no Exploration Applications have been made in the Cook Islands.

But now an on-going challenge is gaining community involvement in knowing about the DSM sector, as there are a lot of misconceptions and misleading information on this topic and it is also not a “current concern” for many of our people. So we conduct regular information and awareness building sessions with our community and stakeholders.

Who is the Paul Lynch outside the seabed mining world? What are your passions and interests?  How do you spend your free time?  What’s the best thing about living in Rarotonga?

I am a local Cook Islands lawyer and hold numerous academic qualifications, which all help me undertake this interesting deep sea minerals role for our nation. I am a former national representative in football and enjoy keeping active. I am a representative of our large, landowning chiefly Napa family on the beautiful main island of Rarotonga, which is rightfully called “Paradise on Earth”. I have traveled the world and there is nowhere like the Cook Islands, our peaceful and beautiful homeland in the heart of Polynesia.