An article just published in the Proceedings of the Royal Society B describes two remarkably different hydrothermal vent fields discovered in the southern Gulf of California. Despite being relatively close together, these vents host very different animal communities. This finding contradicts a common scientific assumption that neighboring vents will share similar animal communities. Instead, the new paper suggests that local geology and the chemistry of the vent fluids are important factors affecting vent communities. 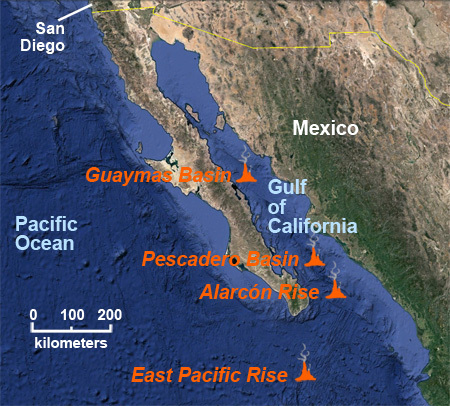 This map shows the major known hydrothermal vent sites in and around the Gulf of California. Even though the Pescadero Basin and Alarcón Rise are relatively close, they host very different animal communities. Base map: Google Earth

In 2012, scientists from the Monterey Bay Aquarium Research Institute (MBARI) used undersea robots to discover a new hydrothermal vent field along the Alarcón Rise at the southern end of the Gulf of California. Continuing the effort in 2015, they discovered a second, very different vent field in the Pescadero Basin, just 75 kilometers to the north.

Led by MBARI scientists, the research involved scientists from Mexico, Canada, Russia, and Germany. In preparing the recent paper, they analyzed collected organisms and video surveys to determine community composition. They also performed DNA analyses of water samples to identify larvae of vent animals and stable-isotope analysis to assess food supplies at each vent field.

The scientists compared the animals living at the Alarcón and Pescadero Basin vent fields with those found in the Guaymas Basin, 400 kilometers to the north, and on the East Pacific Rise, about 300 kilometers to the south. The researchers found that, despite their close proximity, the Alarcón and Pescadero vent fields support radically different animal communities, sharing only seven out of 61 animal species.

This finding contradicts a common scientific assumption that neighboring habitats will share similar animal communities. Instead, the results suggest that local geology and chemistry of the vent fluids play dominant roles in structuring the animal communities. The findings are relevant to assessing the possible ecological impacts of seafloor mining—scientists must account for the uniqueness of local geology and chemistry and not assume that a common supply of animal larvae will colonize and restore neighboring habitats. 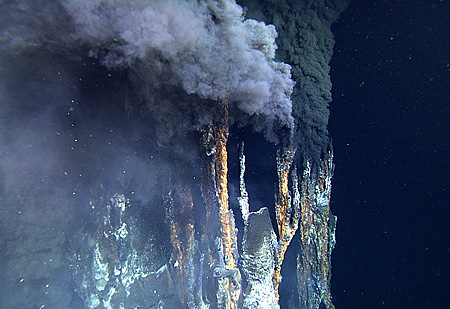 Lead author Shana Goffredi, an MBARI adjunct and associate professor at Occidental College, explained, “Just like human cities, the community that forms in a particular area depends not only on who arrives at that location, but also whether the underlying resources are suitable for their success. Variation in these resources, whether physical or chemical, contributes greatly to the diversity of the region, which is important for community stability.” 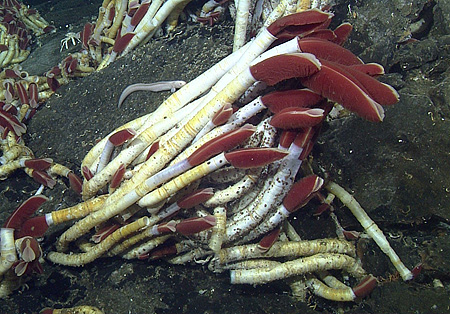 Though neighbors, the Alarcón Rise and Pescadero Basin vent fields are geologically very different. The seafloor along the Alarcón Rise is covered in young, fresh lava, and the fluids spewing out of the vents are very hot (up to 360 degrees Celsius) and rich in metal sulfides that form dark, crumbly chimneys known as “black smokers.” Animals at the Alarcón Rise are similar to locations further south (almost 300 kilometers) on the East Pacific Rise.

Most of the animals found at the Pescadero vents are worms, and many species are new to science. The dominant tubeworms (genus Oasisia) are not common elsewhere in the Gulf. Surprisingly, two thirds of the Pescadero vent animals are not found at vents to the north and south. 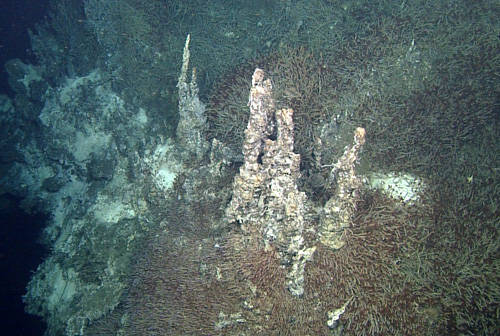 Light-colored carbonate chimneys in the Pescadero Basin host dense colonies of Oasisia alvinae tubeworms that are not common elsewhere in the Gulf of California. Image © 2015 MBARI

For the last two decades, marine biologists have been trying to document how seafloor animals manage to disperse from one discrete hydrothermal vent habitat to another. The majority of vent animals release microscopic larvae that are carried by ocean currents. If some of these larvae survive long enough to reach another hydrothermal vent, they may settle on the seafloor, grow into adults, and colonize a new vent. 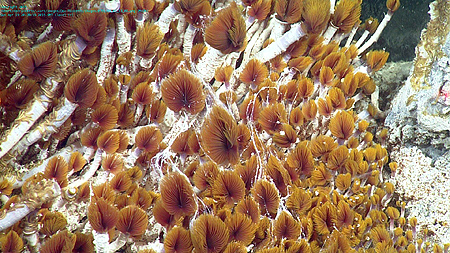 These beautiful tubeworms in the genus Oasisia are the most abundant animals at vents in the Pescadero Basin. Image © 2015 MBARI

This colonization theory led vent biologists to assume that neighboring vent fields should harbor similar animal communities. However, the new paper shows that larvae from one vent may not successfully colonize a neighboring vent. MBARI researcher Shannon Johnson used high-throughput DNA sequencing to identify larvae collected from the water around the vents. Her results showed that larvae from other sites can reach the Pescadero Basin, but prevailing geological and chemical conditions apparently preclude their settlement and growth there.

The researchers conclude that numerous factors affect the composition of the animal communities found at particular vents. Water depth, geology of the seafloor, temperature and chemistry of the vent fluids, and the ability of larvae from other vents to colonize the site all play roles. Given developing efforts to mine deep-sea hydrothermal vent fields for precious metals, the scientists involved in this research suggest that conservationists and management agencies need to consider a broader range of factors in their efforts to predict the environmental impacts and the resiliency of affected communities.

Tear Down That Paywall: The Movement to Make Ocean Research Free for All